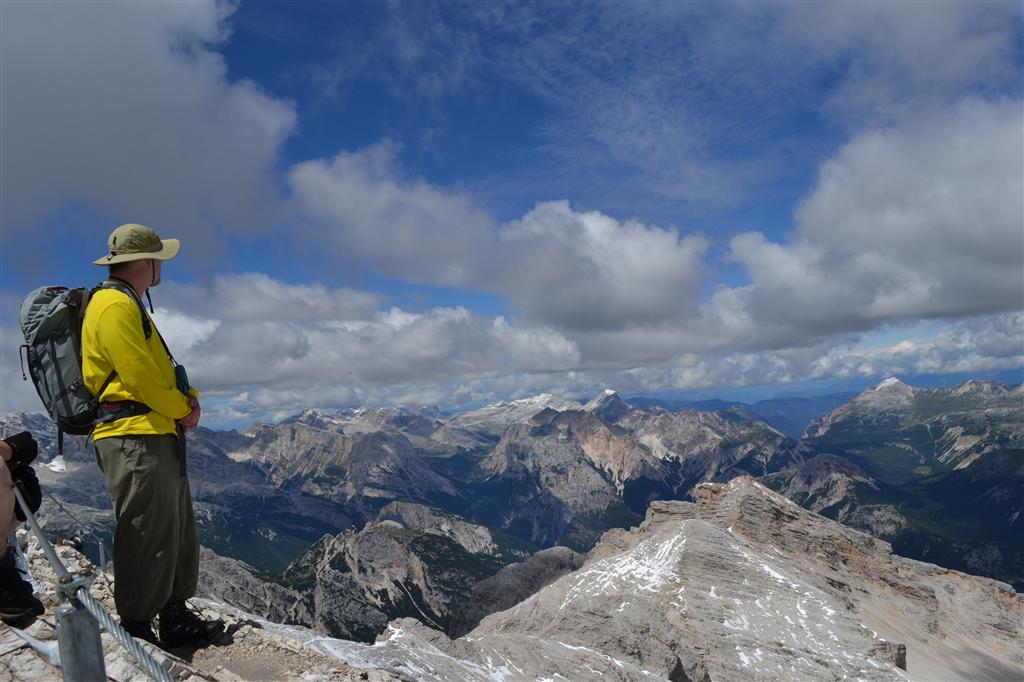 Having been snowed and rained off the Sorapiss Circuit on the Thursday, Duracell (aka Harry) suggested we do a Via Ferrata on the peak adjacent to Monte Cristallo. He said there was only about a hundred metres or so of climbing – right up my street given my athletic state.

There is a two stage ski-lift running up to Rifugio Lorenzo. The lower one was a four seater with a dome covering for weather protection.  The upper one was a two-people-standing pod that looked like one of those capsules used to get the Chilean miners out of their mine. Needless to say the skinny geriatrics shared a pod whilst I was banished to squeeze into my own pod.

The vertical gain on this second leg was somewhat spectacular. It went above the ski-run for some of the way. I have no idea what kind of people would be going down that ski-run except those with a death wish. It was quite a few minutes and the angle of ascent was rather spectacular. We topped out around 2,900 metres although the Rifugio sign indicated 3,000 metres. We had spotted some footsteps in the snow near the top and I wondered what fools had slogged up there when there was a perfectly functional ski-lift nearby.

On the way up we had seen a horde of ants on our target – Via Ferrata Marino Bianchi, so we decided we would scramble up to a lower peak on the left of the Rifugio. As it turns out, this led to the Alpine bridge that featured in the movie Cliffhanger starring Sylvester Stallone. It was quite a spectacular walk and we went to the “summit” a few metres shy of 3,000 metres. There were quite a few people on this route, but it was easy to pass them because we were not clipped in. Make no mistake though, one could take a spectacular, terminal fall in quite a few places. Harry was in flip-flops and found that they were slipping around on his feet because of the snow, so he did the last bit of the descent in bare feet through the snow which blew a few tourons (tourists) minds.

We went back to the Rifugio and donned our harnesses for the VF. There were still a few people around, but we moved off fairly rapidly. It was technically easy, but the route was undulating, going up and down over pillars on the broad arête with massive drop-offs on either side.  I started feeling tired and let Frog pass me fairly early on. That was the last I saw of the two musketeers until minutes before the time of the final ski-lift descent for the day.

I soldiered on for about an hour and a half, but when I decided that it was getting a bit cold for me and I had to stop and don more clothing, I thought it was time to turn back. There was still a significant chunk of rock between me and the summit and hauling this overweight carcass up the Via Ferrata cable had taken its toll on my arms. The wet rock didn’t help either because one couldn’t climb using small footholds as one would easily have done on dry rock, rather one was doing huge arm-hauls keeping one’s weight hanging out to stop your feet slipping down.

Then the snow started!  I’m glad I was on my way out of there as it was getting a bit late and the falling snow was making things a bit unpleasant. I took one minor fall, coming to rest slightly before I hit the next anchor point. I no doubt looked like a scared rabbit at that point. As I recovered from the fact that I could have seriously damaged myself, I heard some classic Italian from just above me. I looked up in time to see a guy smashing into the ledge above with his mate looking on. He was copying me in speeding up his descent and fortunately landed in a thick snow patch. I am sure he said something like “Jolly gosh !”

I continued down, being overtaken by a few guys. I eventually came upon a father, mother and daughter whom I overtook, absolutely staggered to note the poor little girl moaning about cold, bare hands!

I reached the Rifugio wondering how much fun the others were having. I checked my watch and sidled over to the chair-lift to make damn sure I wasn’t going to miss the last lift down at 1615. I was about to board when Harry’s familiar red jacket was visible a few hundred metres away behind a traffic jam of people. I exchanged waves and boarded a pod destined for safety. The rain continued, so I took the second stage down to the car to await them. We decided it was time for some warm beverages, so I ordered a hot chocolate and the others ordered gluhwein. The proprietress obviously didn’t know what that was because they were served cold red wine. Urghh!  My hot chocolate was lekker 🙂