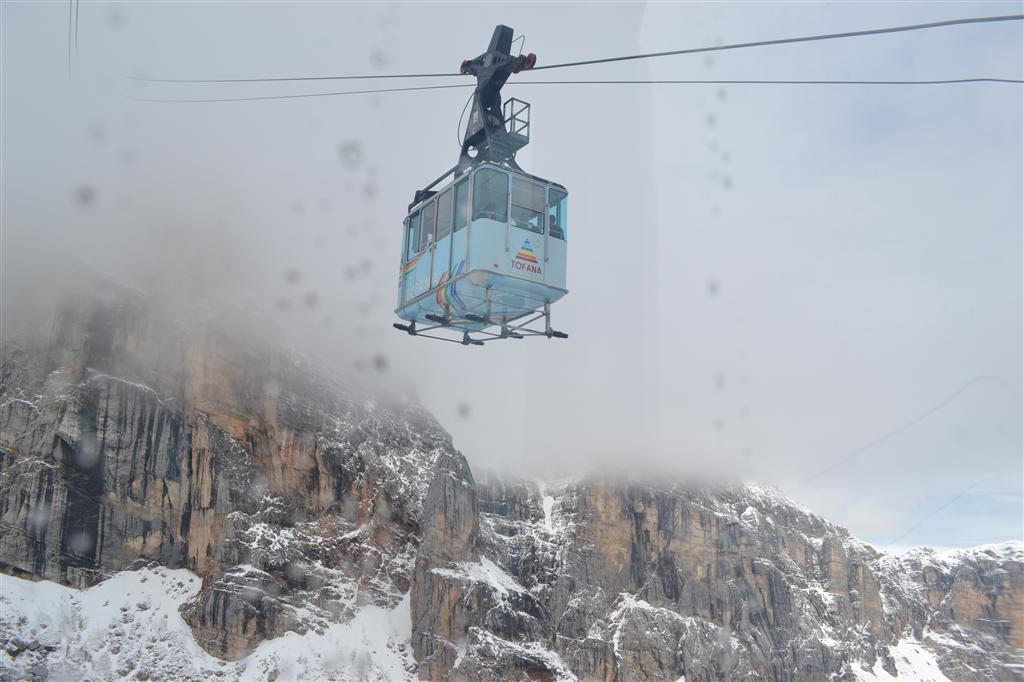 After our long day’s climbing on Cima Grande the previous day, we felt an easy day was in order for Day Seven! Rising later than usual, I climbed out my of tent into a cauldron of cloud. Not fancying cooking oats porridge (our staple breakfast, served with berries and yoghurt… yum!), in the wet, I suggested we go for a big fried breakfast in Cortina.

Funny! Judging by the blank stares, the concept of a fried breakfast simply does not exist in Cortina! And no, it had nothing to do with the fact that my Italian vocabulary does not have sufficient words in it to describe a fry-up!! The nearest we could find was a near mixed grill served as part of the lunch-time menu at 5 Torri Restaurant; but only when the restaurant opens for lunch… So we settled for Italian breakfast fare… Well, a little more than that… We upgraded to a toasted Ciabatta type bread with a melted cheese and prosciutto filling! Stomachs seen to, we took a drive across Passo Giao… Heading for lunch in Agordo… Arriving some time later, after having negotiated the 42 hair-pin bends and the more than 42 other bends (which also seemed to me to be hair-pin bends but were apparently not?), we found a very pleasant Pizzeria tucked away behind the market square.

The pasta al aglio e olio was excellent, the service very good and pleasant and the passing parade consisting of geriatric motor bikers and other lunch-time occupants interesting.

Despite our long day out and late arrival back after climbing Cima Grande the previous day, we were keen to do more than sit around eating! So plans were made to be on the first cable car leaving for Lagazuoi from Passo Falzarego by 9.00am the next morning. Then to get to the base of ferrata Tomaselli asap, ahead of the potential Saturday crowds.

I woke up during the night to the sound of a hard pelting rain on my tent roof; which only seemed to abate around 6.30-ish. I finally mustered up enough courage to emerge from my warm snug cocoon into what seemed to be a somewhat colder world than the day before and go for a shower. As I climbed out of the tent, I saw glimpses of occasionally revealed snow-covered mountains peering through the clouds above us. And the snow wasn’t just on the peaks, it came down as far as the treeline, which suggested barely a few hundred meters above us.

We departed for Passo Falzarego hoping that the snow was contained in our valley, stopping briefly in Cortina to find that banks do not open on Saturdays in Italy. When we arrived it was icy, icy cold and the wind was blowing. I went and talked to the gentleman who hires out helmets for ascents/descents of the Lagazuoi tunnels, but he, like I, felt that Tomaselli in cold and windy conditions won’t be any pleasure. So, over a cup of warm coffee we decided to take yet another drive and view some more road-side scenery, looking for inspiration for future climbs.

Passing through Misurina I remembered there was a climbing shop with good quality gear at very reasonable prices and owned by a very interesting gentleman who’s also a mountain guide to major expeditions. Signor Giovanni Becher did not disappoint and Frog and I walked out proud owners of a pair of AKU approach shoes each. Mine was so comfortable on, I didn’t bother to take them off, and only remembered much later that I was still wearing shop socks… Which were duly posted back to the shop-keeper, so that his over-arching impression of South African tourists wouldn’t be: “sock-thieves…”.

Lunch with my new shoes on and a glass of Prosecco to wash the food down, tasted even better than the day before! Dinner at our usual hang-out across the road was spent writing blog entries and sorting photos. And making plans for the next day’s climbing….

Snow piled knee-deep on the path to the top, and lacking proper snow and ice gear, even the planned walk to the top from the upper cable car station, had to be abandoned. So coffee and some of the hutkeeper’s excellent apfel strudel were enjoyed while mists were dancing in front of the hut window – occasionally revealing a glimpse of the surrounding mountains and the valleys below.

When the temperature in the hut dropped below 12 degrees we decided to pack up and took the cable car down to the next station to look for a lunch spot. A long chat with the hutkeeper who agreed with me that he hadn’t seen snow like this, at this time of the year, for a long time. (I’ve spent at least two weeks each year in July/August for the past eight years in the Dolomites, and give-or-take a couple of wet/cold days have always been blessed with sunshine.) Unable to find a decent lunch spot, where the wind wouldn’t blow our napkins away, we took the second cable car down to the next level, where we found a warmer spot with a good view and had our lunch. Then it was down with the final stage cable car of Freccia nel Cielo (Arrow in the sky), back to Cortina cable car station.

Radlers and birre grandes were ordered while we plotted our next day’s potential climbs… Looking at the weather and forecast, which didn’t leave much scope for climbing, and given that Pigmy was due in Venice next day (Tuesday) convinced Andre and I that warmer weather in Venice may be a more attractive alternative.