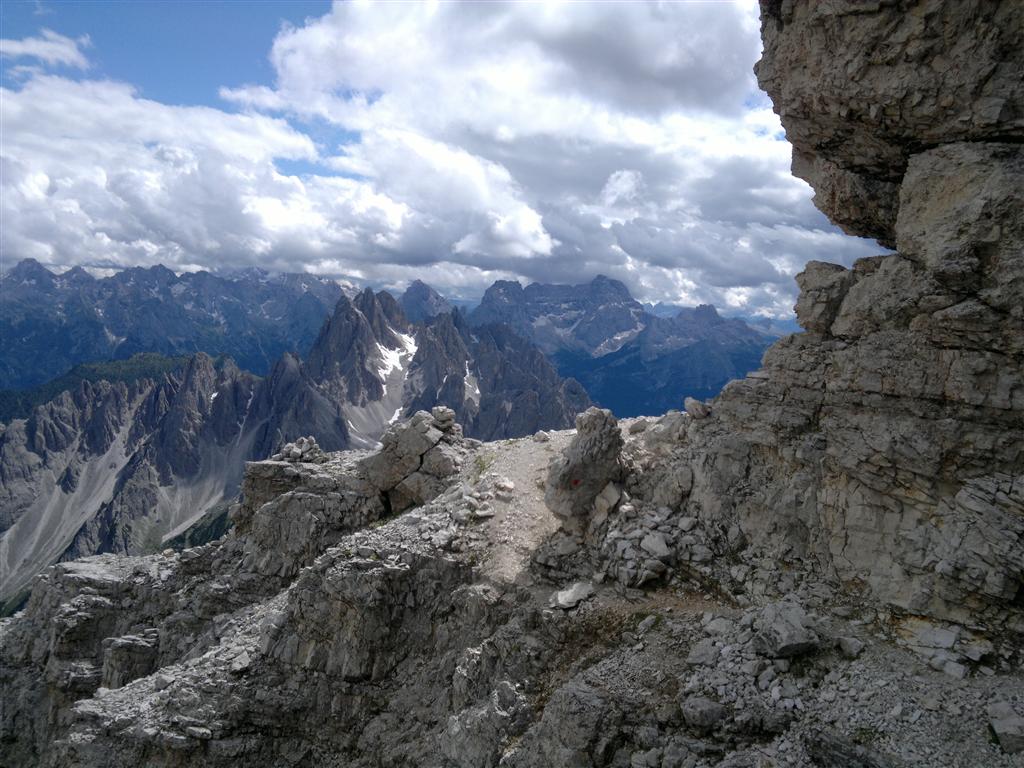 Frog writes from the participant’s point of view:

Our intrepid three set off very early from Camping Rochetta to drive to Rifugio Auronzo below the Tre Cima di Lavaredo.

Post breakfast [and with a few extra bread rolls purloined from the breakfast table] Harry and Frog peel off to do the original route [opening ascent anno 1869!!] on the Cima Grande, leaving the Pigmy to while away the day on more sedentary activities. Strict instructions left with Pigmy not to raise any alarm on a late return, until the next day (prescient perhaps?)

Weather looking good as the two climbers rise slowly up the path to the base of the route. A leisurely arranging of gear, perhaps slightly reluctant to begin, and then up the easy leftwards ramp. Route started at 09:50 (more about timing to follow).

All going to plan as the route works its way up the initial ramp/chimney to the first notch. Salutations to an abseiling German pair, encountered just below the first notch, descending early on account of route finding difficulties and then moving steadily but fairly slowly on to the second and third notches.

Finding the climbing surprisingly reasonable in quality for a route opened in the nineteenth century, moving together most of the time through a series of cracks, faces and the occasional chimney, our pair pass another descending party who went to the top but also admitted to some route finding errors. Blue markers  on the rock are mentioned.

The “upper terrace” at last ( a large gravel covered ledge ), a welcome late lunch at 15:00 with the excellent Rifugio Auronzo bread rolls. Leaving the rucksacks on the terrace, and moving left to what appears to be the obvious steps mentioned in the route description, our climbers soon find themselves in a clearly “off-route” and slightly concerning position. Anxious moments as Harry down climbs, whilst Frog waits precariously perched below in an eroded and loose gully.

Back on the ledge after the impromptu detour, they find the correct steps adjacent to a blue route marker!

The mistake has cost more than an hour and the day is speeding on. Clouds are starting to roll in ominously around the Cima Grande and adjacent neighbours, and a downpour is apparent a short distance away. A hurried conference about the advisability of continuing, and then a setting of faces and minds for the top.

On the summit at 17:25 with rain beginning to spatter on the surrounding rocks. Some hurried photographs to prove the point, and the initial down scrambling and abseils to rejoin our sacks. Longer abseils with the doubled ropes, and then on pulling down the ropes at the bottom of a full length abseil, a melon size rock dislodged from way above hits Harry on the shoulder. The air turns blue with language not found in any text book as Harry dances around in agony. Luckily nothing broken and with a few anti-inflammatory tablets taken to prevent swelling, the descent continues…

Slowly onwards through the seemingly incessant abseils, with occasional showers for refreshment and darkness looming. At the base of another abseil, another dislodged rock (luckily only fist sized this time) comes whistling out of the gloom to score a direct hit on Frog’s helmet. Senses of humour are beginning to fail.

Darkness overtakes the pair at circa 21:00, headlamps fumbled on to helmets and the base of the route draws nearer. Heavy rain accompanies them on the last abseil with a magnificent wet and heavy rope tangle to deal with.

Base of the route at last, and without pausing to remove harnesses the two speed off down the path towards the car. Unfortunately in the darkness, the duo are confused by the direction of the path and break out leftwards over alternate scree and loose rock fields towards the lights of a distant hut. Rifugio Lavaredo. The wrong hut!

Rain is beating down on the heads of the pair as they stride along the road, singing,  to the Rifugio Auronzo, arriving at the car at 23:30 to the relief of a waiting Pigmy.